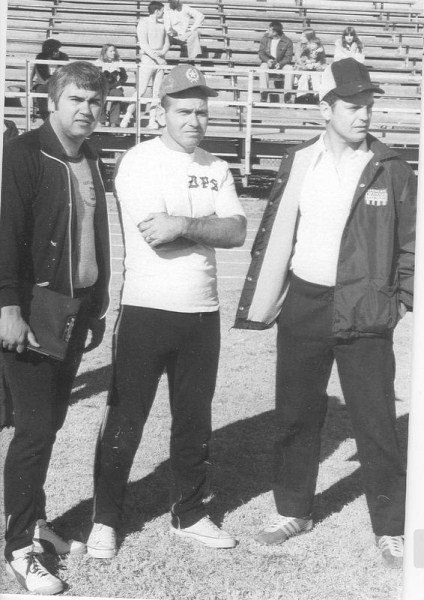 The Texas Police Games, that we know today, are well organized competitive events that enable commissioned Police Officers the opportunity to compete with fellow Police Officers from the State of Texas as well as on a nationwide level. The idea of promoting good physical condition, through competitive athletic competition, originated in California. Mr. Duke Nyhus, a San Diego Assistant Chief, founded the California Police Athletic Federation in 1966.

In 1968-69 Dallas Police Officer Anthony Risner discovered that the State of California had established the California Police Athletic Federation which encouraged good physical conditioning through athletic competition. Officer Risner competed in the California Police Olympics and started researching and enlisted the help of the Dallas Police Association and other officers to work towards establishing the Police Olympics here in Texas.

With the research and dedication of these officers and more, the concept of the Texas Police Athletic Federation, better known as the TPAF, was conceived in 1974 by officers Steve G. Baggs (Texas Department of Public Safety), O.L. Cullum (Ft, Worth Police Department) and Tim R. Vought (Dallas Police Department). These officers conducted the first Texas Police Recruit Championships in Dallas in April of 1975. The event was repeated in Austin in January of 1976 and in Ft. Worth in December of 1976.

The TPAF was chartered and received it’s original funding through contributions made by the Dallas Police Association and the Texas Department of Public Safety Officers Association. The TPAF was established to foster physical fitness and comradeship among peace officers in the State of Texas and from other states by the organization and promotion of athletic events and competitions in which peace officers can compete. The TPAF logo is a registered trademark.

The Texas Police Games are conducted annually and are open to all sworn peace officers, local, state and federal, who meet the specific requirements as defined and outlined in Article 2.12 of the Texas Code of Criminal Procedure, the by-laws of the Texas Police Athletic Federation, and those who are primarily engaged in law enforcement activities which center on criminal apprehension and detention.

Texas and California were not the only states to host police games. Other states had organized on a statewide level and were also having competitive participation.

Because of the growing size of these national games, and the considerable distance some competitors had to travel, a decision was made to hold the National Police Olympics every two years.

By the time San Diego won the bid for the 1978 games, the name was changed to the International Police Olympics. Competitor interest, at the international level, has continued to grow and grow and the games are now host to well over 6,000 to 7,000 competitors. Numerous countries have been host to the games, with competitors coming from all over the world. Next to the real “Olympics”, the International Police Games is the second largest non-professional athletic competition, based on the number of competitors.

The Board of Directors of the TPAF consists of elected members from several law enforcement agencies throughout Texas. Each board member donates his/her time and efforts to the Federation. Board members receive no compensation other than reimbursement of expenses. The TPAF is a non-profit organization.

The Police Games, both state and international, have manifested numerous benefits for law enforcement officers in cities throughout the United States and for the citizens of the communities in which these officers serve.

The games have served to enhance physical fitness among police officers, an essential and integral part of police work.

The games have provided a strong moral factor, instilling pride in the law enforcement profession and in competitive achievements.

They have provided a means for the effective exchange of experience and ideas in a congenial atmosphere.

They have enabled the public to see their police officers in a new and different perspective, to learn more about them through their performance and accomplishments in friendly but highly competitive sporting events.